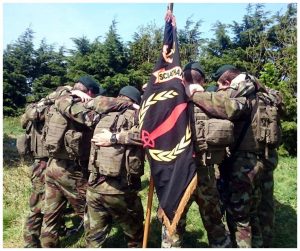 The Unit is officially designated ‘Sciathán Fianóglach an Airm’, which translates as ‘The Army Ranger Wing’. As there is no direct English translation of the term ‘Fianóglach’ so the designation Ranger is the accepted version. Fianóglach links the traditions of the ‘Na Fianna’ (Legendary Irish Warriors) with the present-day Irish Defence Forces ‘Óglaigh na hÉireann’. Qualified members of the unit wear the Fianóglach shoulder flash insignia.

In the late 1960’s and early 1970’s a small number of Defence Forces personnel attended American Army Ranger Courses at Fort Benning, Georgia in the United States. On their return, these personnel were responsible for organising similar type courses which were aimed at bringing standards of training throughout the Defence Forces into line with accepted international standards. Students on these courses were selected from among all ranks and all Units of the Army, the Air Corps, and the Naval Service. These courses proved to be very beneficial in improving standards of physical endurance, marksmanship, individual military skills and small unit tactics.

The evolution of the Army Ranger Wing resulted from an increase in international terrorism in the late 1970’s and 1980’s. The kidnapping of politicians and businessmen as well as the hijacking of air and seagoing craft was of considerable concern to democratic governments. European and other countries realised that conventional police and military tactics were not suited to dealing with this escalating threat.

Ireland, a member of the European Community, was not immune from such incidents and recognised the need for a specialised anti-terrorist organisation.

The Defence Forces was in a position to respond with a competent and highly trained Unit. The increased skills and endurance training of ‘Ranger’-trained personnel provided the perfect basis for the new specialist unit. The Army Ranger Wing (ARW) was formally established, in accordance with the Defence Act, by Government order in March 1980.